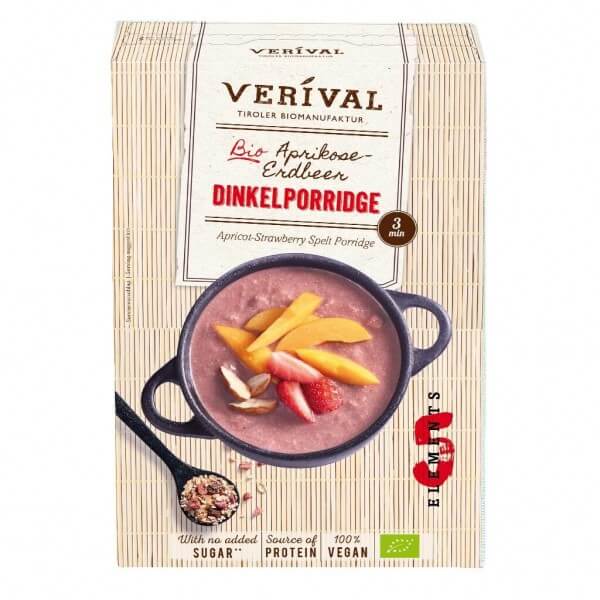 Description Ingredients Recipe Nutritional Value per 100g Evaluations 2
Description
A hot breakfast with a gently cooling effect? An apparent contradiction, but according to... more
Close menu

A hot breakfast with a gently cooling effect? An apparent contradiction, but according to the Five Elements Theory, the recipe for our Apricot & Strawberry Spelt Porridge makes it possible. So our spelt porridge is not only great for summer breakfasting, but perfect for all you hotheads out there all year round!

What is the Five Elements Theory?

Which ingredients are assigned to which element?

The element earth is represented by a total of seven ingredients: apricots, sultanas, strawberries, apples, beetroot, almonds and amaranth. The basic porridge mix, made from nutritious spelt meal and spelt semolina, is the wood element. Metal is represented by subtle cinnamon and fire by aromatic cocoa. And once again the pinch of salt ensures that the fifth element, water, is included.

What's the best way of preparing the Spelt Porridge?

Simply place 50g (6 tbsp) of the spelt mix in a bowl, pour over approx. 120ml of boiling water or hot almond drink (depending on the desired creaminess) and stir well. The porridge is ready to eat after just three minutes and is best enjoyed hot.

Are there any other TCM varieties?

Put 50 g porridge (6 tbsp) in a bowl and pour over 120 ml boiling water or 120 ml hot almond drink (depending on the consistency desired). Stir, leave to soak for 3 minutes and enjoy warm.