These are the most important protein sources for endurance athletes

Lerne unsere Experten kennen
Table of contents
Übersicht ausblenden
This is why proteins are so important
Do athletes need more proteins?
A good protein source
Animal proteins
What are the arguments against animal protein sources?
Vegetable proteins
Cereals as a source of protein
Pulses as a source of protein
Vegan Chocolate Bean Brownies with Chia Seeds
Protein-rich brainfoods – nuts and seeds
Sports products from Verival – the ideal protein breakfast

Proteins are indispensable for our body. While the protein requirement of the general population is usually already covered unconsciously, athletes should pay closer attention to it due to their increased need.

Endurance athletes in particular often underestimate their protein needs. In order to supply the body with sufficient protein, they should definitely know the most important protein sources. Because through sport and an ideal diet, performance can be sustainably increased.

The optimal companions for everyday sports - The Verival Sport Range

This is why proteins are so important

Protein is one of the most important nutrients for our body. Because proteins cannot be replaced. While you can certainly reduce fat consumption in favour of more carbohydrates and still be full of energy, there is no suitable substitute for proteins. A sufficient protein intake is therefore extremely important – especially if you are active in sports.

But what exactly are proteins responsible for in the human body? For one thing, they give the body its structure and enable movement. This is largely ensured by the muscles.

On the other hand, proteins occur in the form of regulatory units, such as enzymes, and are thus involved in numerous biochemical reactions in the body. But proteins are also needed to maintain immune function and as a source of energy.

In a nutshell – yes! Athletes, whether in the field of endurance or weight training, have an increased need for dietary protein.

One of the reasons for this is that the sporting activity causes minor damage to the muscles, which must be repaired. The building blocks of these regeneration processes are amino acids, the components of protein.

When choosing protein sources, it is important to pay attention not only to the quantity, but also to the quality. The human body is at its most efficient when it is optimally supplied with nutrients.

A good protein source is not only characterised by a high proportion of protein (quantity), but also by its composition (quality). This composition of the components of protein, which are called amino acids, is defined in nutrition science by the concept of biological value.

In simple terms, this concept means that the so-called amino acid profile, i.e. the amino acids contained in the protein, should correspond as closely as possible to that of the human protein.

This ensures that the protein from food can be better converted into the body’s own protein, such as our muscles.

However, the figures are not percentages. Rather, the hen’s egg serves as a reference value. However, this value can also be exceeded. An example of this is a mixture of milk and potatoes, which together have a value of 114.

What are the arguments against animal protein sources?

In contrast to animal protein sources, vegetable proteins have hardly any undesirable side effects. On the other hand, they have a slightly lower average biological value than their animal counterparts. However, to meet your needs, you should know a little about the best plant-based protein sources.

If you know which protein-rich foods to choose from and how best to combine them, you won’t have to worry about getting enough.

Cereals as a source of protein

Cereals contain more protein than one would expect at first glance. Whole grains and pseudo grains in particular have a notable protein content. Another advantage is that the amount of grain that can be consumed is very high.

After all, you rarely eat just 10 grams of pasta. The usual portion is 100 to 150 grams. The same applies to oatmeal. They are also usually consumed in portions of 50 to 100 grams. This significantly increases the amount of protein actually consumed.

Cereals, such as oatmeal, also have a significant amount of health-promoting fibre and complex carbohydrates. This ensures long-lasting satiety and a sufficient supply of energy, from which endurance athletes in particular can benefit.

Cereals and pseudocereals therefore form the basis of a protein-rich plant-based diet. But the true superfoods among the vegetarian protein suppliers are the pulses.

Pulses as a source of protein

Pulses, such as beans or lentils, are indispensable in a plant-based diet. Not without reason – because they are not only rich in healthy fibre and minerals, but also have an above-average protein content.

Chickpeas, which can be used in a variety of ways, are also worthy of mention, with just under 20 grams of protein. 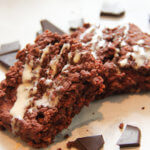 A handful of nuts and seeds alone can contain up to 10 grams of protein. The great advantage of these protein sources is that they can be integrated into the everyday diet easily and in a variety of ways. For example, chia seeds are particularly good as a topping for porridge, yoghurt and the like.

Nuts, on the other hand, can not only serve as a topping in their original form, but can also be processed into a tasty puree. Almond butter, for example, is particularly good as a healthy spread on bread or a low-carbohydrate green protein waffle. But nut puree is also suitable in protein-rich shakes, processed in cake batter or as an additional source of flavour in porridge.

You’ll find the best of the vegetable protein world in our Verival Sport Range. To optimise the biological value of our products, the protein-rich ingredients have been combined in such a way that they enhance each other.

The Best Seller Sport Protein Porridge with the flavour cocoa-banana, for example, consists of a combination of wholemeal oatmeal, sunflower and pumpkin seed protein powder and linseed. This product provides you with all the essential amino acids for breakfast.