Cocoa vs. chocolate – Why cocoa is so healthy

Lerne unsere Experten kennen
Table of contents
Übersicht ausblenden
Cocoa production
How is chocolate made?
Where does cocoa originally come from?
Health benefits of cocoa
Chocolate vs. cocoa – Which is healthier?
Which chocolate is healthy
How to incorporate the superfood cocoa into your breakfast
Sport Porridge
A delicious recipe
Nut Porridge Brownies

Chocolate helps you lose weight. Chocolate contains a lot of sugar. Cocoa lowers the blood pressure. Maybe you have heard these often contradictory opinions before. In this article, we will answer all your questions about cocoa and chocolate and compare these two. The motto is “Cocoa vs. chocolate – which product is better?”

In addition, you will learn everything about the production of the popular sweet tooth and how you can satisfy your craving for something sweet at breakfast in a healthy way without having to give up anything!

So stay tuned until the end!

The plant without which there would be no cocoa and no chocolate is the cacao tree. It grows in Central and South America as well as along the Ivory Coast and parts of Asia. Harvesting is time-consuming because the cocoa pods often have to be taken from the trees by hand.

The cocoa beans are then taken out and fermented for about a week. This gives the beans their brown colour and aroma. After drying, the first production process is finished.

For the next step, the cocoa beans are broken, roasted and ground into a uniform mass. To obtain cocoa powder, the cocoa mass is then separated from the cocoa butter, leaving the so-called cocoa press cake. After this is carefully loosened up, we get the finished cocoa powder.

How is chocolate made?

For chocolate, the cocoa mass is processed further. Depending on the type of chocolate, i.e. whole milk, dark etc., different amounts of sugar, milk powder, cocoa butter and other ingredients are added and mixed well. The next important steps in the production process are rolling and conching, which means that the chocolate mass is heated and stirred. This enables the fine taste for which chocolate is known and loved.​1​

Where does cocoa originally come from?

Did you know that cocoa only came to Europe in the 16th century? Before that, however, it had been known for a long time by the Aztecs, the inhabitants of Mexico. Together with corn flour, pepper, vanilla and water, the ground cocoa beans were a much sought-after drink.

At the beginning of the 19th century, the first chocolate factories were founded and chocolate became more affordable for the masses.​2​

Now that you know the manufacturing process and how the beans came to Europe, let’s take a closer look at cocoa, because it really deserves the superfood label!

Unsweetened, heavily deoiled cocoa powder contains a large amount of protein (about 23g/100g) and minerals such as iron (14.6mg/100g), magnesium (432mg/100g), or copper (4.4mg/100g). Since these ingredients are important for a well-functioning immune system, your muscles and bones, cocoa can contribute to a sufficient supply!​3​

Furthermore, research has shown that cacao has a blood pressure lowering effect.​4​

In the supermarket, you should still pay attention to the ingredients. Drinking cocoa powder often contains a large amount of sugar and sometimes other additives.

For those interested in acid-base nutrition, it is helpful to know whether cocoa is acidic or alkaline. Although cocoa is an acidifier, the positive, healthy nutrients predominate, which is why you do not have to omit cocoa.

Chocolate vs. cocoa – Which is healthier?

Now that we’ve given you so much information, you’re probably curious to know which is healthier: cocoa or chocolate?

And our answer is cocoa! After all, cocoa is the raw material, whereas chocolate is made with other ingredients. This increases the sugar content and the product is no longer automatically vegan and lactose-free. Furthermore, some nutrients are lost through certain chocolate manufacturing processes.

Which chocolate is healthy

In the past, chocolate was even said to have positive health effects. Before cocoa became a mass product, pharmacies sold it as a medicine. The product was supposed to have a restorative effect after an illness.

Now the legitimate question arises: Is chocolate healthy? Our answer is: it depends! Depending on the cocoa content, chocolate tastes sweet or bitter. The most popular type, milk chocolate, contains the most sugar as well as milk powder. Dark chocolate contains at least 50% cocoa, less sugar and is therefore also lactose-free and vegan.

Chocolate without sugar is offered by some manufacturers. However, substitutes such as erythritol or rice syrup are often used in supposedly sugar-free chocolate. It is therefore advisable to look carefully.

Some people swear by chocolate for weight loss. Even though some studies confirm a positive effect on the insulin response and an appetite-suppressing effect, more research is still needed to clarify the connections. Moreover, it should not be ignored that chocolate is not low in calories and sugar, which is not too conducive to losing weight.​6​

What can be done about chocolate cravings?

In general, indulgence in moderation is recommended! A simple trick is to let chocolate melt on your tongue instead of chewing. Try it with one piece and you’ll see that you won’t have the urge to eat the whole bar afterwards.

How to incorporate the superfood cocoa into your breakfast

Now that you know about the positive effects of cacao and dark chocolate, you’re probably curious about how you can incorporate them into your healthy breakfast.

One possibility is the porridge topping. For example, you can simply add a piece of dark chocolate or cocoa powder to your porridge.

You can also add the cocoa powder to the porridge.

The easiest way to integrate the superfood cocoa into your breakfast is certainly our Sport Porridge Cocoa-Banana! You can prepare a healthy breakfast in just three minutes.

In addition to the benefits of cocoa, this hot breakfast keeps you full for a long time. The water-soluble carbohydrates in oats begin to swell and dissolve in the body. This enlarges your stomach in a positive sense and you feel full.

What’s more, the porridge contains no added sugar! The natural sweetness of the bananas and dates is enough to satisfy your craving for something sweet in the morning.

Plus, with the unsweetened cocoa and oatmeal, you can get 45% of your daily magnesium, 78% of your copper and 36% of your iron at breakfast!

Are you convinced? Then try the porridge now!

Did you know that Sport Porridge is suitable for much more than breakfast? This all-rounder also makes a great dessert!

How about nutty brownies, for example? Of course, dessert is not as healthy as breakfast, but for a special occasion or a “cheat day”, the vegan cake is definitely perfect!

Another plus: the cake is simply prepared without flour and is therefore also gluten-free.

Try it out right away and see for yourself! 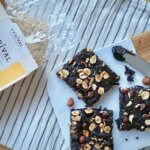