What is the best way to season my porridge? Here’s what you need to know about different porridge seasonings

Porridge has already become a real breakfast classic for many people. And rightly so, because porridge not only tastes good, but is also extremely healthy and versatile.

But there is one thing that many people forget when they think of porridge – the spice. In this article, we’ll tell you which spices you should definitely try out and what they can offer in addition to their taste characteristics.

Which spices are suitable for my porridge

As different as porridge can be prepared, the suitable spices also vary. While vanilla, cocoa or cinnamon are particularly suitable for sweeter porridges, more exotic spices such as curry, cardamom or even chilli can be used in savoury porridge.

There is no right or wrong way – the important thing is that it tastes good. However, we would like to give you a few tips on how to choose the right spices for your porridge.

Hearty porridges – you should definitely try these spices

A general spice tip for savoury porridge is difficult. The only spice that always works is a pinch of salt. This serves as a flavour enhancer and thus helps other flavours to stand out more.

For example, if you want to try a warming porridge for winter, we would recommend the Pumpkin Spice Porridge. It’s made with our Verival Classic Porridge Blend, plant-based drink, Hokkaido pumpkin, apple and spices. Ground cinnamon, ginger, allspice, nutmeg and cloves are particularly suitable for this. 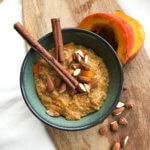 Start the autumn with a warm porridge! This is how you can have a nutritious breakfast in the cold season.
Total Time25 mins
Servings: 2

But cinnamon also works extremely well in combination with carrots and oat flakes, as is the case with our Carrot Cake Porridge. 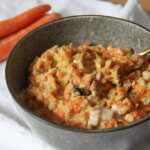 Even cardamom, aniseed and chilli are suitable for savoury porridge. Mix 50 grams of oat flakes with a little water or milk and add a pinch of salt and the three exotic spices.

If you are a curry lover, for example, you can also use the basic porridge recipe and simply add curry, turmeric, fennel or chilli. This will turn your porridge into a tasty lunch. 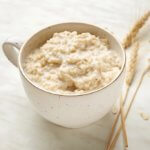 If you like to combine your morning oatmeal with fresh berries, cocoa powder and vanilla are particularly good. Fresh raspberries or strawberries with a chocolatey porridge and a light vanilla flavour will tantalise your taste buds like no other breakfast.

And of course, a pinch of salt is never missing.

But besides the taste benefits, there is another reason to use a variety of spices. Because they are extremely healthy.

Spices are so healthy

For example, even in small quantities, cinnamon can regulate blood sugar levels and thus even indirectly help people lose weight. But cinnamon’s properties also make it suitable for people with type 2 diabetes and people with pre-existing cardiovascular diseases. In addition to its positive effects on blood sugar levels, it can also lower the bad LDL cholesterol.

Cocoa is one of the healthiest spices of all. According to this, the popular spice has a vasoprotective effect and can thus counteract high blood pressure and heart disease. Cocoa also keeps your mind fit and strengthens your immune system. While it is said to have a mood-lifting effect, it also helps protect the body from oxidative stress.

Turmeric, on the other hand, receives little attention, especially at breakfast. Nevertheless, it is worthwhile to use turmeric regularly. According to studies, it can even replace some medicines in terms of their effect. According to this, sufficient amounts of turmeric can lower cholesterol levels, acts as a natural blood thinner and inhibits inflammatory processes. Turmeric could even help with arthritis and depression – the list of positive properties seems almost endless.

Chilli does not seem to be able to do quite as much, but still surpasses most other spices. According to this, chilli is said to have a mood-lifting effect. But the hot spice is also said to be beneficial for heart health.

These spices help you lose weight

In addition to all the health-promoting properties, some of the spices can even help you lose weight. For example, chilli suppresses hunger and boosts energy consumption. Apparently, regular chilli consumption can regulate appetite and increase the calories burned after a meal, thus promoting weight loss. By the way, you can easily find out your ideal weight yourself with the BMI calculator.

Other spices, such as cinnamon, support weight loss indirectly by keeping blood sugar levels stable. This means that less insulin needs to be released, which in turn facilitates fat loss.

Turmeric, on the other hand, can positively influence the intestinal flora thanks to its antioxidant properties and thus increase health and well-being in this context. Turmeric root can also help with digestive complaints. All this in turn indirectly promotes targeted weight loss.

Spices are not only important for taste, but also beneficial for health. Accordingly, it makes sense to season your food sufficiently. This applies to lunch as well as breakfast. Feel free to experiment or get inspired by our recipe ideas.