Whether you believe in Santa or rather in the Austrian version, the “Christkindl”, doesn’t really matter here. What matters, however, is that the Christkindl doesn’t get anything in return for bringing presents, whereas big ol’ Santa Clause is offered milk and cookies in almost every household in the US. Maybe that’s why he looks as well-fed as he does in his red two-piece despite the hard work he does.

But instead of cookies we proudly present a dish that is just as christmas-y and delicious but a much healthier alternative to have for breakfast: Baked Apples filled with Oat Flakes & Nuts and Crunchy Muesli with Orange and Acerola. Spiced with cinnamon and served with vanilla flavoured yoghurt this recipe is the surest & yummiest way to ring in the winter season. And it would serve Santa’s figure very well, too. 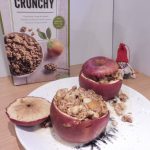