We’re delighted to announce that we recently started supplying breakfast fan and professional climber Barbara Zangerl with our Mueslis, Crunchy Mueslis and Porridges to take along on her climbing tours. The daredevil Austrian loves climbing for its variety, thrives on tackling fresh challenges and constantly tests her own limits. In our blog we profile this sportswoman and her great head for heights:

Born in Austria’s westernmost province of Vorarlberg, Barbara Zangerl’s stellar career in climbing began at the age of 14, when her brother first took her along to the indoor bouldering centre in the nearby town of Flirsch. Barbara immediately developed a taste for the sport and began to spend every spare minute at the bouldering centre. During a trip to Switzerland she made her first attempt at a natural rock face, such a formative experience that her clear focus was on bouldering from that moment onwards. There followed six intensive years in which she travelled the world exploring one bouldering region after another.

A severe back injury in 2009 kept Barbara away from bouldering for a considerable period of time. During her convalescence she discovered sport climbing, which has been her passion ever since. 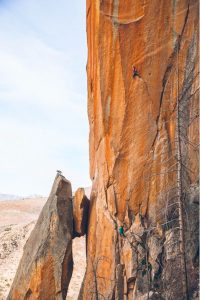 Today it is the sheer variety of the sport and the many different climbing styles that she finds so fascinating, and that likewise keep her motivated to carry on. She loves travelling to different climbing regions to try out Alpine routes with multiple pitches, as well as practising trad and sport climbing. For Barbara, climbing is much more than just a sport; it has become a way of life. Now more than ever, she loves to push herself and relishes new challenges and the thrill of successfully conquering them. Overcoming her own limits gives her an indescribably uplifting feeling that spurs her on to keep pushing the envelope.

In winter Barbara trains at the indoor climbing centre, while in the summer months she tries to spend as much time as possible in the mountains and on the rock.